Of all the figurines that H-R has released, my favorites are the horse models designed by Maureen Love Calvert, usually just known as Maureen Love.

That's why, a few months ago, I was so pleased to be able to get a copy of the March 1962 issue of Western Horseman magazine.  It contained a one-page article, "Sculptress at Work," illustrated with many photographs, on Maureen's work. 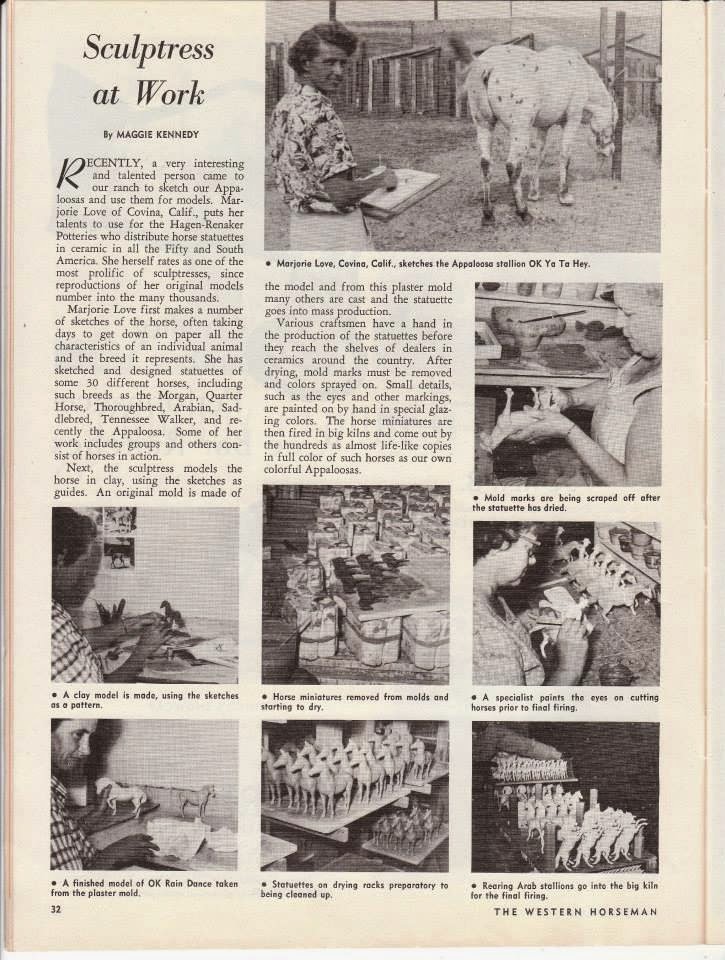 In the article, by author Maggie Kennedy, Western Horseman identified her as "Marjorie Love."

Here's the full text of the article, which begins:

Sculptress at Work
by Maggie Kennedy

Recently, a very interesting and talented person came to our ranch to sketch our Appaloosas and use them for models. Marjorie [sic] Love of Covina, Calif., puts her talents to use for the Hagen-Renaker Potteries who distribute horse statuettes in ceramic in all the Fifty and South America. She herself rates as one of the most prolific of sculptresses, since reproductions of her original models number into the many thousands... 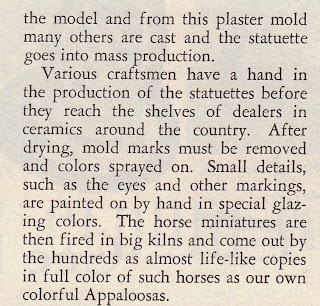 And here are the photos: 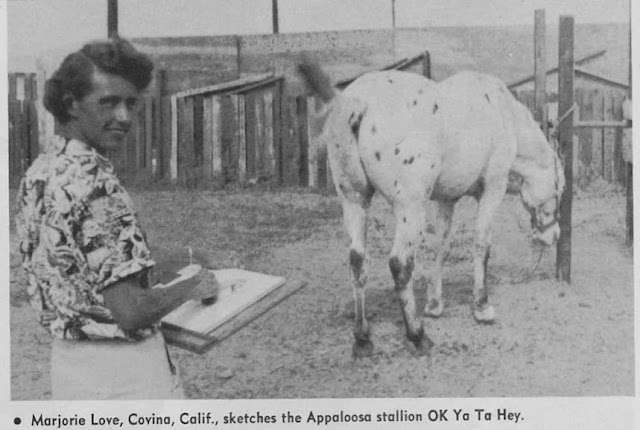 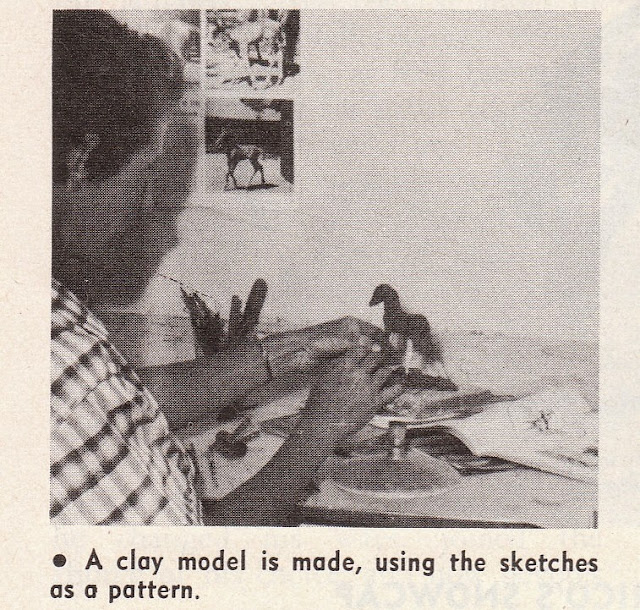 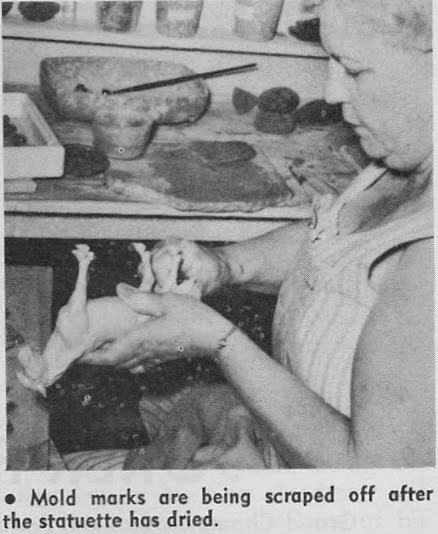 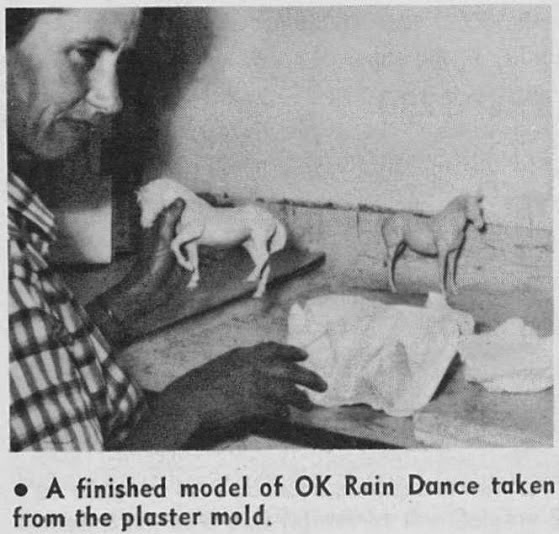 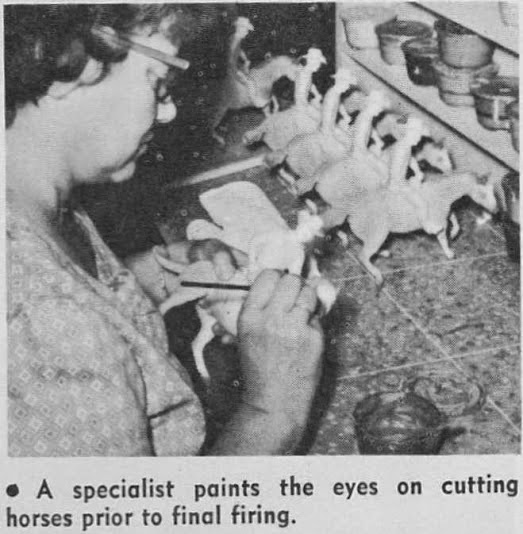 An interesting article, with insights on how Hagen-Renaker horses were created.

When I shared the article with my friend Joanie, who had known Maureen Love personally, I discovered that Western Horseman had not only gotten Maureen Love's name wrong; it also mis-identified one of the photographs in its article, perhaps for the sake of the narrative "flow" of the story.  In the photograph of Maureen Love working on the Appaloosa figurine just removed from the mold, the discarded mold looks sort of like a blob. 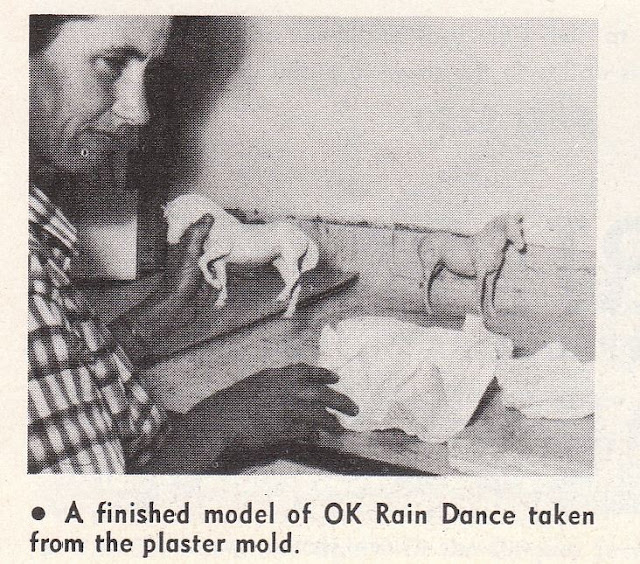 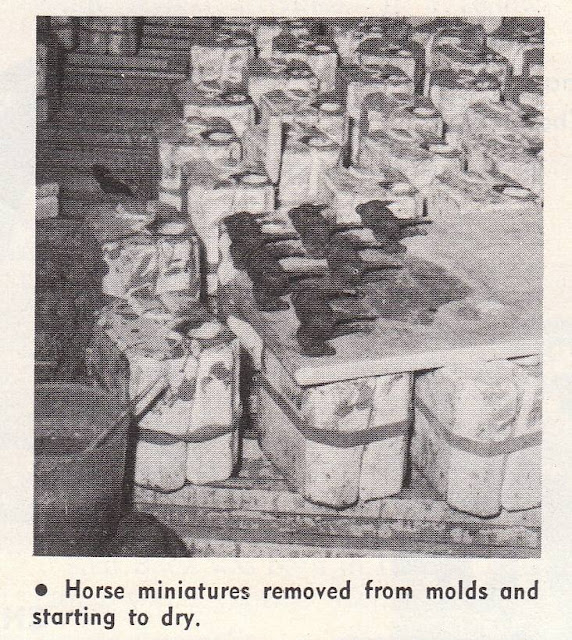 Joanie told me that the horse in the picture of Maureen Love with the discarded mold was one of Maureen's own personally-created versions of the design:

Joanie knew Maureen very well, and had taken me with her to meet back Maureen in 1991.  Maureen Love died in 2004, leaving behind a huge body of work -- the models she created for Hagen-Renaker as well as her own animal sculptures.

Meeting this outstanding artist and seeing her own collection -- in the company of friends who also appreciated Maureen's work -- was one of the high points of my model horse-collecting career.


Bear that in mind while I tell you about the estate sale. In my weekly Internet trolling of ads for upcoming sales, I found one in northern San Diego County that showed this small and grainy but intriguing photograph:

I immediately arranged to meet Joanie at the sale.  "Get there before daylight," we agreed. We were first in line, ahead of many other estate sale shoppers.

We came home with not just the two horses in the estate sale ad photograph....


But also with a third horse, which the previous owner had mounted on fabric inside a display case.  Joanie carefully removed it from the case so we could examine it alongside the other two horse figurines.


They all look like the same horse, but in different styles. In the photo above, the two figurines at the top are Maureen Love's own renderings of her own original clay sculpture. The one at the bottom was the Hagen-Renaker production piece.

So how did these three exquisite little pieces of equine art end up at one estate sale?  The answer is in the Western Horseman article.  Maggie Kennedy wrote that Maureen had visited to sketch her Appaloosa horses.  Appaloosa breed records show that OK Ya Ta Hey and other Appaloosa horses were owned by William H. and Margaret Kennedy. Margaret Kennedy died at age 87 earlier this year.  It was the sale of her estate. Maureen Love must have given her the two original works and possibly the Hagen-Renaker version of Maggie's Appaloosa mare, which was named OK Rain Dance, as well.

Hagen-Renaker gave many of its animal figurines that Maureen Love designed, names -- Arabians like "Abu-Farwa" and "Sheba," Quarter Horses such as "Two Bits" and "Erin."  Hagen-Renaker called its own version of this pretty Appaloosa, "Love."  Appropriately named, I think. 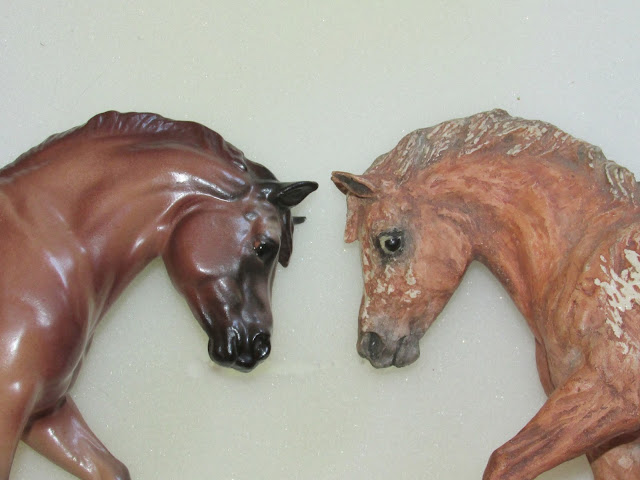 You can read more about Hagen-Renaker and Maureen Love at the links below:


UPDATE: More information has surfaced on the history of the "Love" Appaloosa, from Hagen-Renaker historian Nancy Kelly! Read my update here: